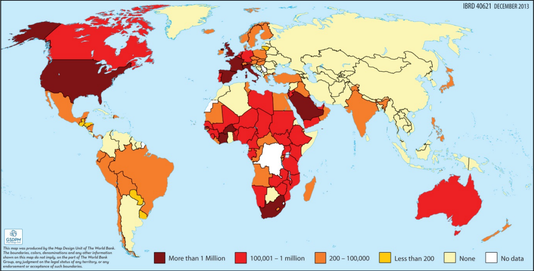 Migration is one of the most discussed topics in economically developed Western countries and is a crucial element on the agenda of right-wing politics. Building walls, wires, and fences to prevent people from crossing their borders and taking legal action, such as the UK's agreement with Rwanda to relocate migrants reaching its shores, continue to dominate political debates. However, remarkably, these countries also pass laws to attract a skilled labour force, such as engineers and healthcare workers, adding to the migration phenomenon. The criticisms of policies against migration and those calling for more restrictions have mainly remained local, focusing on the cultural aspect. Nevertheless, reading these two policies together shows that a regional focus misses the economic structure at a global level.

Wallerstein (1974) proposed the 'world economic system' theory to show how multicultural territories are integrated by economic relations. He divided the world into the core and the peripheries, with technologically developed, capital-intensive countries constituting the core; and labour-intensive, less developed countries constituting the peripheries. In this system, semi-peripheral or developing countries, constitute a buffer zone between the core and the periphery. The system functions by the accumulation of the surplus capital in the core that generates the dependency of the periphery. The 'world economic system' is based on the worldwide division of labour; labour intensified works are allocated to the periphery, and high-technology works are at the core. There is also the flow of raw materials to the core to be sold on the periphery markets as refined products. As a result, the core reproduces the conditions of dominance to continue exploiting the periphery.

The ageing population and low birth rate in the core, together with the cost of long-term investment in human capital, made attracting skilled labour in the periphery a solution. The impact of the pandemic on the economy and the World Bank's suggestion to invest in human capital for a resilient recovery (World Bank 2021) intensified this search that brought more attention to this phenomenon. Germany’s making legal amendments to attract skilled workers from other countries, and the UK’s aim to retain higher education graduates from UK universities to fuel their economies after the pandemic are two cases in point. What made this phenomenon more popular, however, is not only the recent development, but the fact that the skilled labour flight has accelerated since the 1960s, with the developed countries constituting the most popular destinations (Docquier 2014). Although the statistics (Global Economy 2022) show that the developed countries, such as Germany and the UK, are also not exempt from experiencing the skilled workers' flight, the trend follows economic development in which less developed countries are those affected most.

Wallerstein's reading of the capitalist world order shows a parallel with the Marxian class structure in which the bourgeoisie exploits the proletariat and the petit bourgeoisie, who is also a buffer zone between the two. The difference in Wallerstein's reading, however, is designation of surplus capital in a country, rather than a class, such as global bourgeoisie. This also draws parallels with the colonial exploitation of the colonised countries and the imperialist intrusions aimed at controlling natural resources, such as oil, gas and minerals. The brain drainage from periphery countries to more developed countries needs to be seen as the continuation of exploitation in the global age in which high-tech products generate the most surplus capital, and in which sophisticated skilled workers constitute resources of investment.

Yunus Abakay is a PhD candidate at the Institute of Arab and Islamic Studies at the University of Exeter, the UK.