Tracing the Global in African American

With icons like Malcolm X and Muhammad Ali, many around the world are aware that there are African American Muslims. A growing body of scholarly work documents the rich history of conversion to Islam among Black Americans and the diverse ways in which they have practiced their faith. These studies demonstrate what is American about the African American turn to Islam, grounding the history in contexts of Black religion, Black nationalism, and the Great Migration. [1] Important as the American context is, another side of this story is more international in scope. The frequency of travel to and from the Islamic world and the influence of international Muslim thought attest to the global side of African American Islam.

Malcolm X’s Autobiography testifies to the transformative effect of travel to the Islamic world in his own life. [2] His 1964 pilgrimage was a pivotal moment in his shift from the “proto-Islamic” Nation of Islam to traditional, Sunni practice. [3] Malcolm’s voyage, however, was neither the first nor the last such example. From the early days of African American conversion to Sunni Islam in the 1930s, individual believers have traveled to the Muslim heartlands to make pilgrimage and seek knowledge. Professor Muhammed Ezaldeen, born James Lomax, became “the single most important figure in the early development of African American Sunni Islam.” He had travelled to Turkey and Egypt in the 1930s before returning to New Jersey to found the Addeynu Allahe-Universal Arabic Association (est. 1938). [4] Nafi Muhaimin of Philadelphia, after converting to Islam in the 1940s, eventually received a scholarship to study at the Islamic University in Medina (est. 1961) and moved his entire family to Saudi Arabia in the 1970s. Years later, after completing their own studies in Medina, his sons, Anwar and Anas Muhaimin, continue to run Quba Masjid on Lancaster Avenue in West Philadelphia today. African American converts have been traveling to Muslim countries to study Islam and then returning to their home communities for nearly a century. This pattern has shaped the landscape of Islam for Black Americans.

Trends in Islamic thought abroad have impacted even those who have never been abroad. For instance, in Philadelphia, many who converted to Sunni Islam in the 1970s recall the popularity of books by Abu al-A’la Mawdudi, the Islamic revivalist from India. [5] Whether they borrowed copies from friends or purchased their own at Hakim’s Bookstore on 52nd Street, Mawdudi’s books were some of the most popular texts for new Muslims of that era. Other converts from that period remember reading Milestones by Egyptian Islamist Sayyid Qutb. [6] Looking back, themes of these texts certainly matched the institutional culture of some early African American mosques. Dar-ul-Islam was the preeminent Black-led Sunni organization of the 1970s, and it required its members to pledge themselves “to the majlis (imamate), whose duty is to establish, develop, defend, and govern according to the precepts of the Shariah.” [7] These American Muslims were tuned into the language of establishing Islamic sovereignty. It was a language that thinkers like Mawdudi and Qutb had promulgated for years and it found receptivity among young, Black converts who were looking to Islam as not only a new system of belief but as an alternative way of life. It also landed well on ears accustomed to the slogans of independence and self-reliance that had been familiar from the era of Marcus Garvey through the rise of the Black Panther Party.

Subsequently, we can see that African American Muslim communities have since shifted away from the militant and politically-oriented interpretations of Islam as have many in the Middle East. In the wake of a stream of conflicts and violence associated with Islamist movements in the 21st century, Qutb and Mawdudi have largely disappeared from, for instance, both institutions of learning in Saudi Arabia and the African American Muslim community in Philadelphia. While those who converted in the 1970s were quick to pick these authors up, the current generation of converts would be unlikely to read their works. The Da’wah Center on Germantown Avenue, one of the largest Islamic bookstores serving Philadelphia’s African American Muslim community today, would not even carry Qutb.

African American Muslim communities interact not only with the Qur’an and Sunna, but also with ideas, people and trends from the Islamic heartlands. We are just beginning to understand the global dimensions of this vibrant Muslim community that is indigenous to the West yet engaged with the East. As we learn more, we will also be able to collect evidence for a closely related question: In what ways have African American Muslims influenced the global umma? 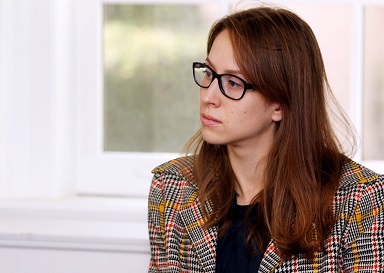 Dr. Emily Goshey graduated in 2019 from Princeton University’s Department of Religion and is now a postdoctoral research fellow at the Institute for Studies in Global Prosperity based in New York. Specializing in modern Islamic studies, her most recent work has focused on the role of faith and religion in social movements.